The high-level overview contains all the information you need to use Basic Normalization when pulling from APIs. Information past that can be read for advanced or educational purposes.

When you run your first Airbyte sync without the basic normalization, you'll notice that your data gets written to your destination as one data column with a JSON blob that contains all of your data. This is the _airbyte_raw_ table that you may have seen before. Why do we create this table? A core tenet of ELT philosophy is that data should be untouched as it moves through the E and L stages so that the raw data is always accessible. If an unmodified version of the data exists in the destination, it can be retransformed without needing to sync data again.

If you have Basic Normalization enabled, Airbyte automatically uses this JSON blob to create a schema and tables with your data in mind, converting it to the format of your destination. This runs after your sync and may take a long time if you have a large amount of data synced. If you don't enable Basic Normalization, you'll have to transform the JSON data from that column yourself.

Basic Normalization uses a fixed set of rules to map a json object from a source to the types and format that are native to the destination. For example if a source emits data that looks like this:

Then, basic normalization would create the following table:

You'll notice that some metadata are added to keep track of important information about each record.

Additional metadata columns can be added on some tables depending on the usage:

The normalization rules are not configurable. They are designed to pick a reasonable set of defaults to hit the 80/20 rule of data normalization. We respect that normalization is a detail-oriented problem and that with a fixed set of rules, we cannot normalize your data in such a way that covers all use cases. If this feature does not meet your normalization needs, we always put the full json blob in destination as well, so that you can parse that object however best meets your use case. We will be adding more advanced normalization functionality shortly. Airbyte is focused on the EL of ELT. If you need a really featureful tool for the transformations then, we suggest trying out dbt.

Airbyte places the json blob version of your data in a table called _airbyte_raw_<stream name>. If basic normalization is turned on, it will place a separate copy of the data in a table called <stream name>. Under the hood, Airbyte is using dbt, which means that the data only ingresses into the data store one time. The normalization happens as a query within the datastore. This implementation avoids extra network time and costs.

Why does Airbyte have Basic Normalization?​

At its core, Airbyte is geared to handle the EL (Extract Load) steps of an ELT process. These steps can also be referred in Airbyte's dialect as "Source" and "Destination".

However, this is actually producing a table in the destination with a JSON blob column... For the typical analytics use case, you probably want this json blob normalized so that each field is its own column.

So, after EL, comes the T (transformation) and the first T step that Airbyte actually applies on top of the extracted data is called "Normalization".

Airbyte runs this step before handing the final data over to other tools that will manage further transformation down the line.

To summarize, we can represent the ELT process in the diagram below. These are steps that happens between your "Source Database or API" and the final "Replicated Tables" with examples of implementation underneath: 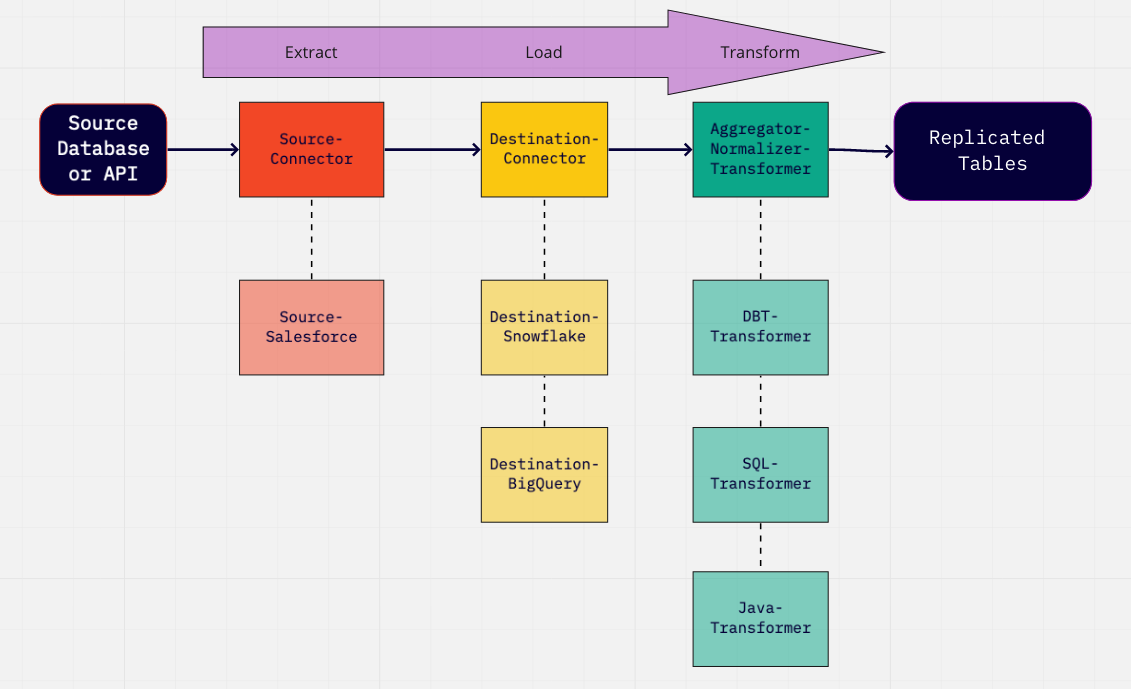 In Airbyte, the current normalization option is implemented using a dbt Transformer composed of:

Airbyte tracks types using JsonSchema's primitive types. Here is how these types will map onto standard SQL types. Note: The names of the types may differ slightly across different destinations.

Airbyte uses the types described in the catalog to determine the correct type for each column. It does not try to use the values themselves to infer the type.

Basic Normalization attempts to expand any nested arrays or objects it receives into separate tables in order to allow more ergonomic querying of your data.

Basic Normalization expands arrays into separate tables. For example if the source provides the following data:

The resulting normalized schema would be:

If the nested items in the array are not objects then they are expanded into a string field of comma separated values e.g.:

The resulting normalized schema would be:

In the case of a nested object e.g.:

The normalized schema would be:

When extracting nested objects or arrays, the Basic Normalization process needs to figure out new names for the expanded tables.

For example, if we had a cars table with a nested column cars containing an object whose schema is identical to the parent table.

The expanded table would have a conflict in terms of naming since both are named cars. To avoid name collisions and ensure a more consistent naming scheme, Basic Normalization chooses the expanded name as follows:

By following this strategy, nested columns should "never" collide with other table names. If it does, an exception will probably be thrown either by the normalization process or by dbt that runs afterward.

Note that different destinations have various naming limitations, most commonly on how long names can be. For instance, the Postgres documentation states:

The system uses no more than NAMEDATALEN-1 bytes of an identifier; longer names can be written in commands, but they will be truncated. By default, NAMEDATALEN is 64 so the maximum identifier length is 63 bytes

Most modern data warehouses have name lengths limits on the longer side, so this should not affect us that often. Basic Normalization will fallback to the following rules:

However, in the rare cases where these limits are reached:

As an example from the hubspot source, we could have the following tables with nested columns:

As mentioned in the overview:

To enable basic normalization (which is optional), you can toggle it on or disable it in the "Normalization and Transformation" section when setting up your connection: 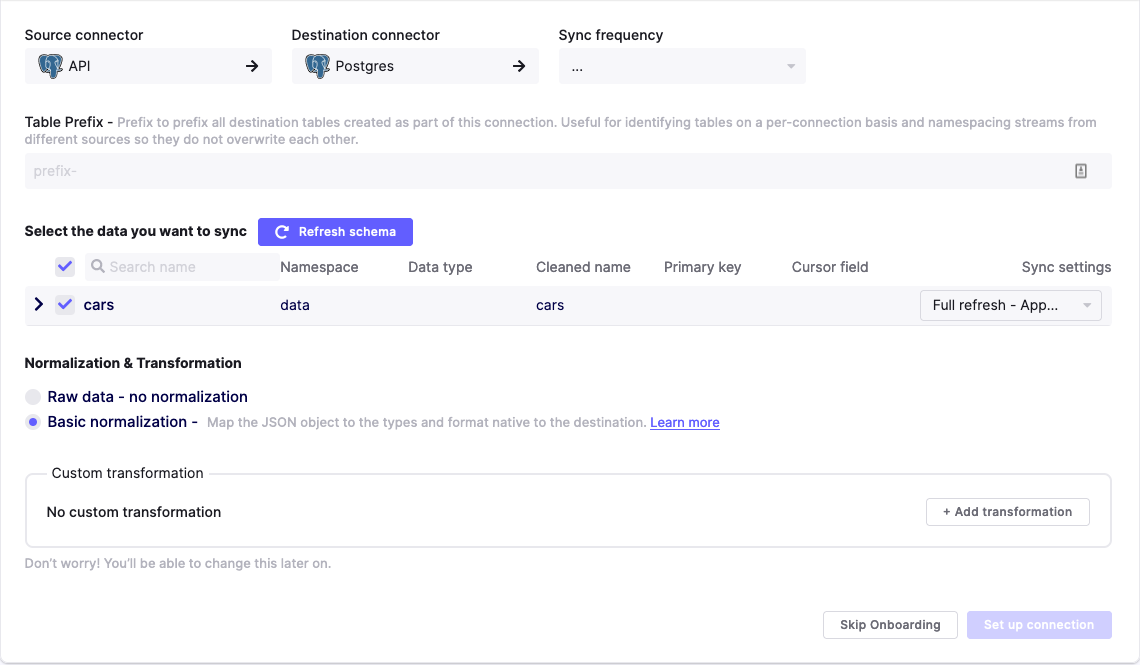 When the source is configured with sync modes compatible with incremental transformations (using append on destination) such as ( full_refresh_append, incremental append or incremental deduped history), only rows that have changed in the source are transferred over the network and written by the destination connector. Normalization will then try to build the normalized tables incrementally as the rows in the raw tables that have been created or updated since the last time dbt ran. As such, on each dbt run, the models get built incrementally. This limits the amount of data that needs to be transformed, vastly reducing the runtime of the transformations. This improves warehouse performance and reduces compute costs. Because normalization can be either run incrementally and, or, in full refresh, a technical column _airbyte_normalized_at can serve to track when was the last time a record has been transformed and written by normalization. This may greatly diverge from the _airbyte_emitted_at value as the normalized tables could be totally re-built at a latter time from the data stored in the _airbyte_raw tables.

Normalization produces tables that are partitioned, clustered, sorted or indexed depending on the destination engine and on the type of tables being built. The goal of these are to make read more performant, especially when running incremental updates.

In general, normalization needs to do lookup on the last emitted_at column to know if a record is freshly produced and need to be incrementally processed or not. But in certain models, such as SCD tables for example, we also need to retrieve older data to update their type 2 SCD end_date and active_row flags, thus a different partitioning scheme is used to optimize that use case.

On Postgres destination, an additional table suffixed with _stg for every stream replicated in incremental deduped history needs to be persisted (in a different staging schema) for incremental transformations to work because of a limitation.

Note that all the choices made by Normalization as described in this documentation page in terms of naming (and more) could be overridden by your own custom choices. To do so, you can follow the following tutorials:

Note that Basic Normalization is packaged in a docker image airbyte/normalization. This image is tied to and released along with a specific Airbyte version. It is not configurable independently like it is possible to do with connectors (source & destinations)

Therefore, in order to "upgrade" to the desired normalization version, you need to use the corresponding Airbyte version that it's being released in: